On The Ground International

Grassroots Support for Venezuelans in Colombia

Douglas is a funny little man with a slow shuffle and a soft voice. He’s lived in Pamplona his whole life, in the same house. Unlike other shelter directors I’ve visited, Douglas was a little hesitant at first to give me a tour. He launched into a monologue about how much aid the other three shelters in town receive, but when the organizations come to visit him, they tell him his shelter isn’t good enough. “They come, they look, they leave. “Sorry, Douglas, nothing for you.””

I wasn’t sure how to respond. Inside I thought, “Come on buddy, self-marketing! Don’t preface a new visit with telling me how no one else approves of your shelter!”

He eventually decided to let me in, and we walked a bit down the highway to an old gate tied together with chicken wire. 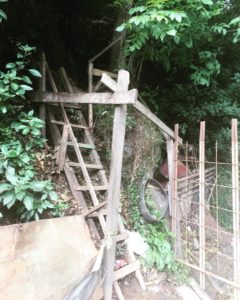 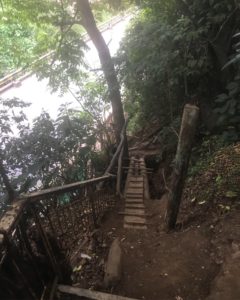 I followed him carefully up two handmade wooden ladders pitched on the impossibly steep hillside, and my jaw dropped at the sight before me. 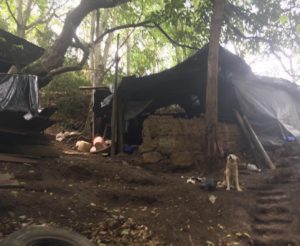 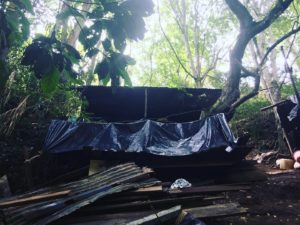 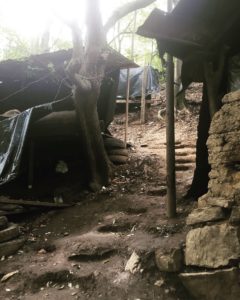 We continued winding our way up the hillside, at this point on slippery dug-out steps, and I started snapping pictures of the platform shelters jutting out of the steep incline. 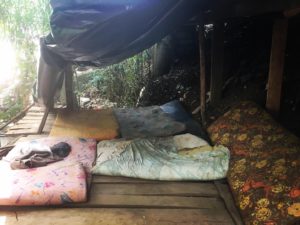 Douglas has built seven platform shelters, with old and warped wood that he scavenges for all over town. In places where there are no trees to be supports, he uses whatever else he can find – old washing machines, tires, bicycle frames. 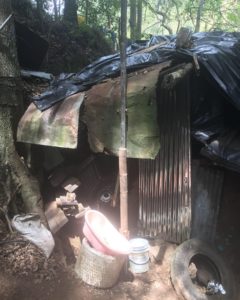 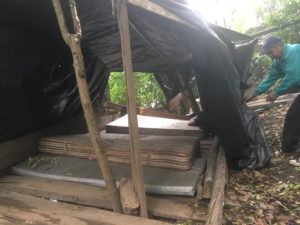 Two of the shelters have a patchwork roof of old rusted tin, the rest are covered in plastic. Douglas has built support frames for some of the plastic roofs, with bamboo and twine.

It took me a moment to adjust to the shock of what I was seeing. Everything he had said about large organizations being unwilling to support him was beginning to click in my brain.

“So, how many people do you have here every night?”

I looked at the moldy mattresses and tried to imagine 124 people cramming together on the rickety wood, covered only with sheets of plastic.

Douglas was rambling again about all the organizations who have come to visit, and disappeared again without giving him anything.  Everything here he’s built by himself, with the help of the Venezuelan volunteers who are living permanently on one of the platforms.

I understood now why all the organizations have walked away. Compared to the other shelters, Douglas’s platforms look like accidents waiting to happen. At the same time, I couldn’t help but feel a kind of awe for this man, and what he has created from junk and reject lumber. Clearly, if 124 people are choosing to sleep here every night, it’s better than sleeping in the street. He’s meeting a huge need. 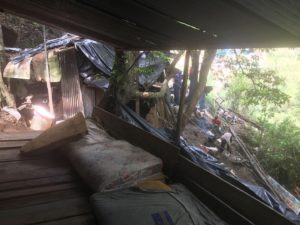 I understand why the Red Cross can’t put their name on his shelter. There are liabilities and risks everywhere. Not to mention hygiene concerns.

But look at his heart! He has little to give – but he’s given it ALL.

I thought about all the people in this country who have big beautiful houses, or acres of flat land. Even in the town of Pamplona – so many people have so much more to offer.

But the owners of the big beautiful houses aren’t opening their doors for Venezuelans. Douglas, with only a steep, muddy hillside, is hosting over a hundred people every night.  No wonder he gets defensive when foreign strangers come to visit – he’s quit his job and is pouring his life into building the best thing he can, completely on his own and literally from nothing, and wealthy people come along and turn up their noses at it.

Douglas isn’t a builder by trade. He is a shoemaker. He quit his job and spends every day building and maintaining the platforms, as well as managing the flow of people on his property. In June it will be one year, and he hasn’t closed a single day or night. Money can’t buy this kind of heart.

I watched one of the blue-jacketed boys score a goal, and as the children whooped and hollered, I started wondering what might be possible at Douglas’s place. What if we could help Douglas improve his structures enough that the large organizations would feel comfortable supporting him? He’s clearly dedicated. Maybe he just needs some resources and support.

I texted some engineer friends. I called my dad. I fired off a string of pictures and videos to my sister Sierra and her engineer/builder/construction guru husband Tyler, with the message “CALL ME!!!!”

I went back the next day to visit Douglas, and took him some money. I told him I love what he’s doing for the refugees, and I have faith in him. But also, some things need to improve, and I want to help with that. Douglas teared up when I gave him the envelope. “One year here, alone, you are the first person to want to help me.”

We talked at length about goals for improving the safety and cleanliness of his shelters. I told him I would be back, and was excited to see his improvements.

Three days later, Sierra and Tyler both had tickets for Colombia. A few days after that, we talked our friend Travis into joining. 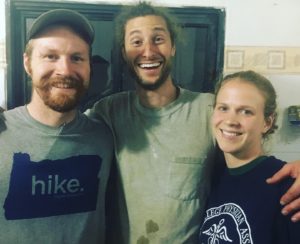 Click here for part two – see what these three were able to accomplish at Douglas’s shelter in just ten days.