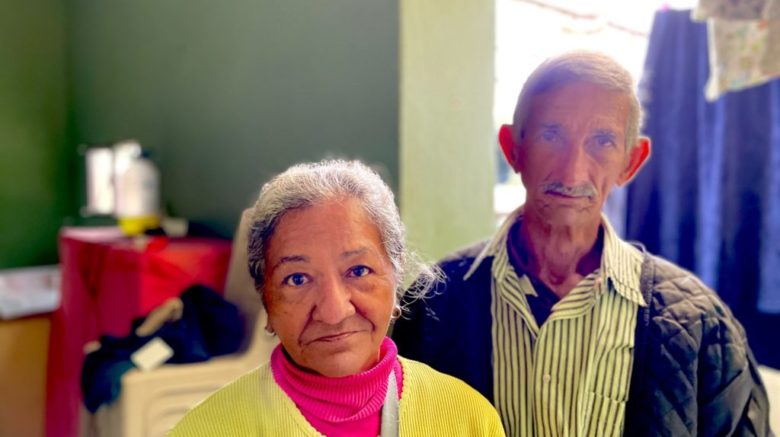 Currently on a career break from her job as a journalist at BBC News in London, Catherine is volunteering with us for 2 months. She made the decision a few months ago that she wanted a year off to volunteer, travel, practice her Spanish and have some new experiences.

It didn’t take me long to settle on Colombia as the country I wanted to spend the most time in, as I knew it would give me an opportunity to help with the Venezuelan migrant crisis and exodus of Venezuelans forced to leave their homes to search for a better future elsewhere.

Here is a humbling and real account of just one couples story told by Catherine Ellis.

His name was Claudio. I’d seen him at the shelter but hadn’t spoken to him. A chaotic night with bickering children meant I’d not thought much of the man and his wife staying in one of the rooms. “He speaks seven languages!” Carlos, a 16-year-old Venzuelan who helps there, told me. “But not English,” he added slightly disappointed. I thought it was both interesting and impressive, but my attention was quickly diverted back to squabbles over pencil sharpeners and a five-year-old wanting to be told how lovely his drawing was.

I saw Claudio the following night but had an equally busy evening (I still didn’t know his name at that point) and didn’t chat to him. It was the next night when he came up to me in pain that I learned of his story. He told me of pain in his ribs and that he had been passing blood. He’d gone to see a doctor, but they said he wasn’t Colombian and couldn’t see him. I took a photo of his injured ribs, noted his other pains and said I’d get advice on what it might be and see if there was anything for the pain we could give him.

He looked older than most caminantes, strong-willed but too old to be walking thousands of miles. A couple of weeks ago he’d left his home on the coast of Venezuela. He had a job lined up on a farm in Colombia – one of the ‘lucky’ ones who had found work before he’d even fled his country. But as he was walking with his wife through the country he’d lived in since a child, five men jumped out of a van armed with guns. They told him to hand over any dollars he had (he had none), but they didn’t believe him. They kicked him to the ground, took his phone and ran away. His wife Isabel was injured too.

I asked him if he had any family in Colombia or Venezuela. “Just a daughter in Venezuela,” he said. I wondered if he’d told her about the attack, but something inside me suspected he hadn’t and I was right. He said that he didn’t want to burden her as she had a lot to think about, and had to look after her nieces and nephews, as well as her own children. I felt guilty that tears were creeping into the bottom of my eyes and tried to concentrate on his feelings, rather than my own. But the story kept getting more poignant, more emotional and more heart-wrenching. His other daughter had died in a car accident five months ago, and that’s why the one left in Venezuela was looking after so many children. I asked if she had a partner to help, but Claudio told me she didn’t, and that her husband had been mugged and murdered a few years ago. Claudio was leaving Venezuela to earn money to send back home. They’d already sold the few possessions they had left – their bed, their cooker, their table – just so their one surviving daughter and grandchildren could survive.

I listened and I listened, and then I excused myself from the room fearing he’d have to be the one to comfort me if I didn’t step away briefly. I don’t cry often, but was fighting back the dampness in my eyes as I spoke to two of the other volunteers playing with the children. I eventually returned to Claudio, we chatted a little more and then I left, unable to shake the dark, heavy aching that had found its way to every corner of my body.

Since our first meeting a few days ago, I’ve learned that he is 80 years old. I’d presumed he was late 60s at most! He was born in Rome and come over to Venezuela as a small child during the Second World War. Until a couple of years ago he’d been a human rights lawyer in Venezuela, now a profession with little use – and no jobs – in a country with a dwindling sense of fairness and justice.

This kind and beatiful couple have found there way into my thoughts as I go to sleep each night, and as I wake each morning. I wish I had a happy ending to this story but as yet, there is only a light dusting of good news. Someone else from OTGI took him to the hospital and managed to get him a prescription and some medication. We’re hoping he gets a lift to his new place of work as his job starts next week, and Ronald at the aid tent is also trying to see if there’s an organisation that might be able to assist.

But for now, Claudio and Isabel are staying at the shelter. Claudio even managed to earn a little money (about £1.20) one morning helping with the traffic flow on the busy road outside. He tries to help around the shelter too, wanting to be useful. My heart ached even more as I saw him chat kindly to Mario, the old man with dementia, and as I watched Isabel sit down with the children to colour in. Claudio then joined her, and the two were lost for a few minutes in a more peaceful world.