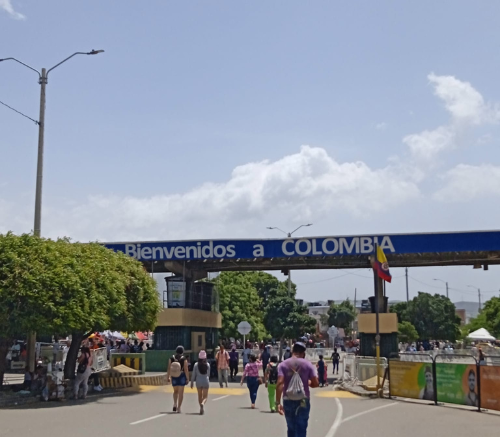 “I try to convince my interlocutors that my security is very tight and I’m in no danger, because I believe those in power exploits this fear that grips Colombians. What better way to destroy people’s hopes than to persuade them that anyone who dares to speak, to accuse, will inevitably be eliminated?”, wrote French Colombian politician Ingrid Betancourt in 2001[1]. The following year, in the middle of a presidential campaign, she was kidnapped by the FARC, sequestered and tortured in the jungle for over six years.

Her story and heroic figure in the French media were my first memory of getting a grasp on what was going on in Colombia at the time. I never could have imagined that I would one day volunteer with Venezuelan migrants arriving in Colombia, let alone be lucky enough to write my thesis on this experience and satisfy the bookworm in me who got passionate in the process.

Now this article is only a modest introduction that may perhaps raise interests on this broad subject. Looking at the intertwined history of Colombia and Venezuela is necessary for a better understanding of the current situation. We have talked about the crisis in Venezuela, but how about Colombia and how is the country responding to this massive migration?

A large majority of Venezuelans that leave their homeland are passing through or settling in Colombia, due to more than 2,500 km of a shared border and the cultural closeness that they share. Comparing to other migration flows in Latin America, Colombia has been receiving Venezuelans relatively well, one can even say with open arms, without any major clashes or anti-migrant movements.

It can largely be explained by how the mass migration used to flow in the opposite direction. Millions of Colombians have left for Venezuela from the 1960s to the early 2000s fleeing the armed conflict between the guerilla groups and the government. While Colombia was overflown with violence, their wealthy and peaceful neighbor Venezuela was attracting migrants from all over Latin America. After the end of the military dictatorship in 1958, its economy was in steady growth to the point it became the richest of the continent in the 1980s. Flourishing with modernity, urbanization and, later, high technology, fast foods… the country was a fast developing paradise of consumerism.

In the meantime, Colombia has been one of the countries with the most internally displaced people for several years, only caught up by Syria, according to reports published by the Internal Displacement Monitoring Center (IDMC) with the Norwegian Refugee Council (NRC). In 2007, roughly 5% of asylum seekers worldwide were Colombians, and between 2000 and 2012 more than 400 000 Colombian migrants flew to the bordering countries of Venezuela, Ecuador, and Panama (UNHCR, 2021).

“out of every ten people killed violently, eight were civilians”

In November 2016, a peace agreement was signed between the Colombian government and the FARC, the largest armed group. The Commission for Clarification of the Truth, Coexistence and Non-Repetition (CEV) was created in the same process, aiming at documenting human rights abuse, guaranteeing the rights of victims and highlighting the reality of the events for the conflict never to be repeated. The Commission presented a final report last June, marking a “historical moment” to quote Michelle Bachelet, UN High Commissioner for Human Rights. It highlights among many other things that “out of every ten people killed violently, eight were civilians”, calls the government to end its militarized approach to drug policy, and holds recommendations for “the construction of a great peace”, in the words of Francisco De Roux, president of the Commission.

The Peace agreement, even though its success has been contested, was a significant step to officially conclude over 50 years of conflict, leading towards more social, economic and political stability for Colombia. Violence persists through local gangs and paramilitary groups in some regions, but it doesn’t compare to these decades of internal conflict. In the recent years, lots of Colombians migrated back to their home country – especially from Venezuela due to the deteriorating economic situation there. Returnees often come back with binational families after building new lives and families in Venezuela.

Today, the roles are reversed. A harsh humanitarian crisis struck Venezuela due to the consequences of hyperinflation and the government sacrificing its people to stay in power. When instability shifted from Colombia to its neighbor, the Colombians have been largely accepting with Venezuelan immigrants. The government has created a border mobility card and a special work permit (Permiso Especial de Permanencia) allowing Venezuelans to legally stay and work in Colombia. Former president Ivan Duque, in office between 2018 and 2022, referred to the arriving migrants as “Venezuelan brothers,” saying his country has and will always receive the migrants with affection “despite any social and fiscal difficulties because we are united by fraternity”, in a speech at the United Nations in which he also denounced Maduro’s regime as a dictatorship.

Yet the massive number and needs of Venezuelans seeking aid makes it a struggle for Colombia to keep pace.

In 2014, things got worse in Venezuela: the economy had been in freefall for years already since the “economic war” declared by Chavez, leading to excessively high prices of food and basic commodities, shortages, starvation, malnutrition, tropical illnesses re-emerging… And hospitals, like most public institution buildings, falling into ruins, lacking basic medication and material even when they do function. A country “out-of-order”, to quote Venezuelan anthropologist Paula Vásquez Lemanza, whose book title sums up the situation[2].

In 2016, there were 53,747 immigrants of Venezuelan nationality in Colombia; two years later this number had increased more than twenty-fold to 1,174,743, and, in 2020, Venezuelan migrants made up 92% of the nation’s total immigrant population (Migración Colombia, 2020). Venezuelans were already leaving to Colombia from 1999 through 2013 fleeing Chavez’s regime, but the more recent wave of migration is more diversified with immigrants of all social classes, and traveling on foot in poorer conditions.

Juan Manuel Santos, Colombian president from 2010 to 2018, who had been welcoming in the first years of the crisis and issued the work permit (PEP) to hundreds of thousands of Venezuelans, has increased border security and set up anti-immigration measures in early 2018. He stopped issuing permits for a while before finally allowing them again in the end of 2018. Solidarity is nonetheless fragile for a country that is just recovering of over fifty years of conflict and suffering. Colombia remained home to 4.9 million internally displaced people as of December 2020 according to IDMC, and is still one of the most inegalitarian countries in Latin America. The armed conflict has left the country with high levels of unemployment and even among the employed, many work in the informal sector and rarely meet the minimum wage. Cúcuta, the border city in which the caminantes arrive through the international bridge, already had an unemployment rate drastically higher than average before it became the entry point for Venezuelans into Colombia. Many migrants sleep on the streets. The mass exodus of Venezuelans is mainly due to lack of basic resources at home and it is challenging Colombia’s resources. In addition, Venezuelans are vulnerable to recruitment into armed groups or sexual exploitation and to accepting work for considerably lower salaries. Protests have taken place in Bogotá against a new refugee camp in 2019, and threats across the country calling the migrants criminals – classic antimigrant narratives that raise tensions in a country still dealing with its own peace process, and unprepared to face such migration.

But these events have remained an exception compared to the climate of solidarity still very much alive. Even between two “brother” countries, one cannot expect a unified migration response but even less so in a country like Colombia, originally a land of emigration, not accustomed to receiving immigrants, let alone in such massive flows.

The election of Gustavo Petro and Francia Márquez sheds hope as well for Venezuelan migrants. The first left-wing president of Colombia promised to re-establish relations with Venezuela and a first step was taken when both countries announced ambassadors. After years of animosity between the Colombian right-wing governments and the authoritarian socialist at the head of Venezuela, they had cut all ties in 2019, when Ivan Duque refused to recognize Maduro’s fraudulent reelection. He supported the opposition leader Juan Guaidó as legitimate interim president, also backed up by most North and South American states.

A lot remains to be done, but drops of optimism are spread out there every day. The vice-president Francia Márquez, Afro-Colombian feminist and environmental activist, fights to bring visibility and inclusion to the most marginalized communities. She referred to them as “los nadies” (the nobodies), after a poem of Uruguayan writer Eduardo Galeano[3], and was deeply criticized for that term but it raises an important social issue that cannot be ignored. She is also a sign of hope for more inclusive future. Does that include the caminantes? We can only hope so.