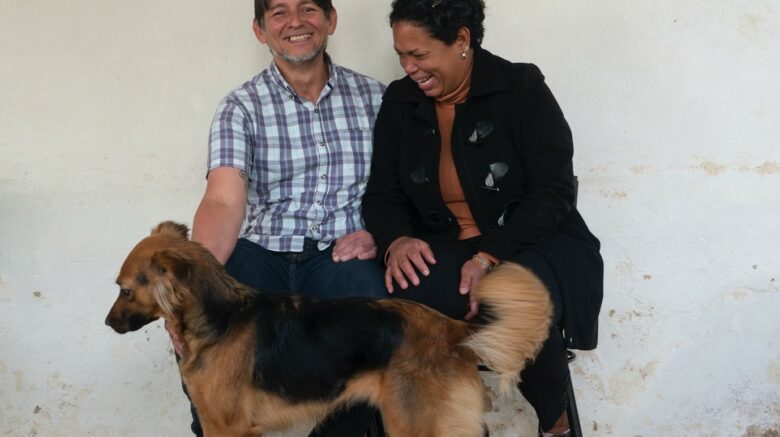 Brodie Hopkins, a photographer and reporter from Australia, spent a week with us last October and made a documentary about our organization and projects. In this article, he chose to tell the story of Maria and Reiner, Venezuelan restaurant owners in Pamplona with whom OTGI has been working for a long time. Since last April, we also started a language exchange in the courtyard of their restaurant allowing locals to practice their English and French with our volunteers every Sunday.

Maria  and  her  husband  Reiner  were  both  born  in  Venezuela.  They  worked  in  Maracaibo’s thriving tourism industry for many years, before finally saving up the funds to follow their real dream  –  owning  a  restaurant.  “Venezuela  is  a  marvellous  place,  it’s  a  marvellous  country,” Maria explains. “It used to be very… How can I say it? Prosperous.” Maria and Reiner’s restaurant flourished as they raised their three young boys. Their life was simpler back then. Their family was safe, happy and healthy. They never imagined that just a few short years later, they would be forced to flee the country they love, and everything they had built there. Maria still remembers the night they decided to leave. “Just go,” she said to her husband, “if you don’t do it, I think we’re going to starve.”

For  four  long  months,  Maria  cared  for  their  children  in  Venezuela.  “It  was  hard  to  find  food for   them,”   she   recalls,   pushing   through   tears.   “I   wasn’t   earning   any   money   from   the restaurant… Some days I didn’t have food for them to take to school.” One morning, a woman named Bethani offered Reiner some work as a chef for On The Ground International  –  a  grassroots  not-for-profit  organisation  in  Pamplona,  working  on  the  frontlines  of  the  Venezuelan  refugee  crisis.  Over  time,  Reiner  was  able  to  save  up  enough  money to send for his family.

Almost four years later, I found myself sitting in Maria and Reiner’s new restaurant, just two blocks from the plaza where Reiner had been selling coffees. Their three boys were at school as  I  spoke  with  the  couple  about  their  arduous  journey.  Watching  their  dog  Laika  bounce playfully  around  the  cobblestone  courtyard,  I  couldn’t  help  but  feel  that  Maria  and  Reiner’s life had finally returned to its original equilibrium, after an unimaginably difficult period.

But while Maria and Reiner’s story is undeniably heartbreaking, it is by no means unique. The Venezuelan  refugee  crisis  is  one  of  the  most  pressing  humanitarian  emergencies  on  the planet,  and  it’s  also  one  of  the  most  overlooked.  Since  2014,  over  7.1  million  Venezuelans  – more  than  a  fifth  of  the  population  –  have  left  the  country,  fleeing  starvation,  disease  and violence.  Each  has  their  own  version  of  Maria  and  Reiner’s  story,  although  most  are  still searching for their happy ending.

A few weeks after Brodie’s visit, Maria and Reiner sadly had to close down due to dangerous damages caused by the rain in the courtyard of their restaurant, Roots. They are currently in the process of finding a new place. We are looking forward to inaugurate their new restaurant and to continue collaborating with them in the future with the language exchange.