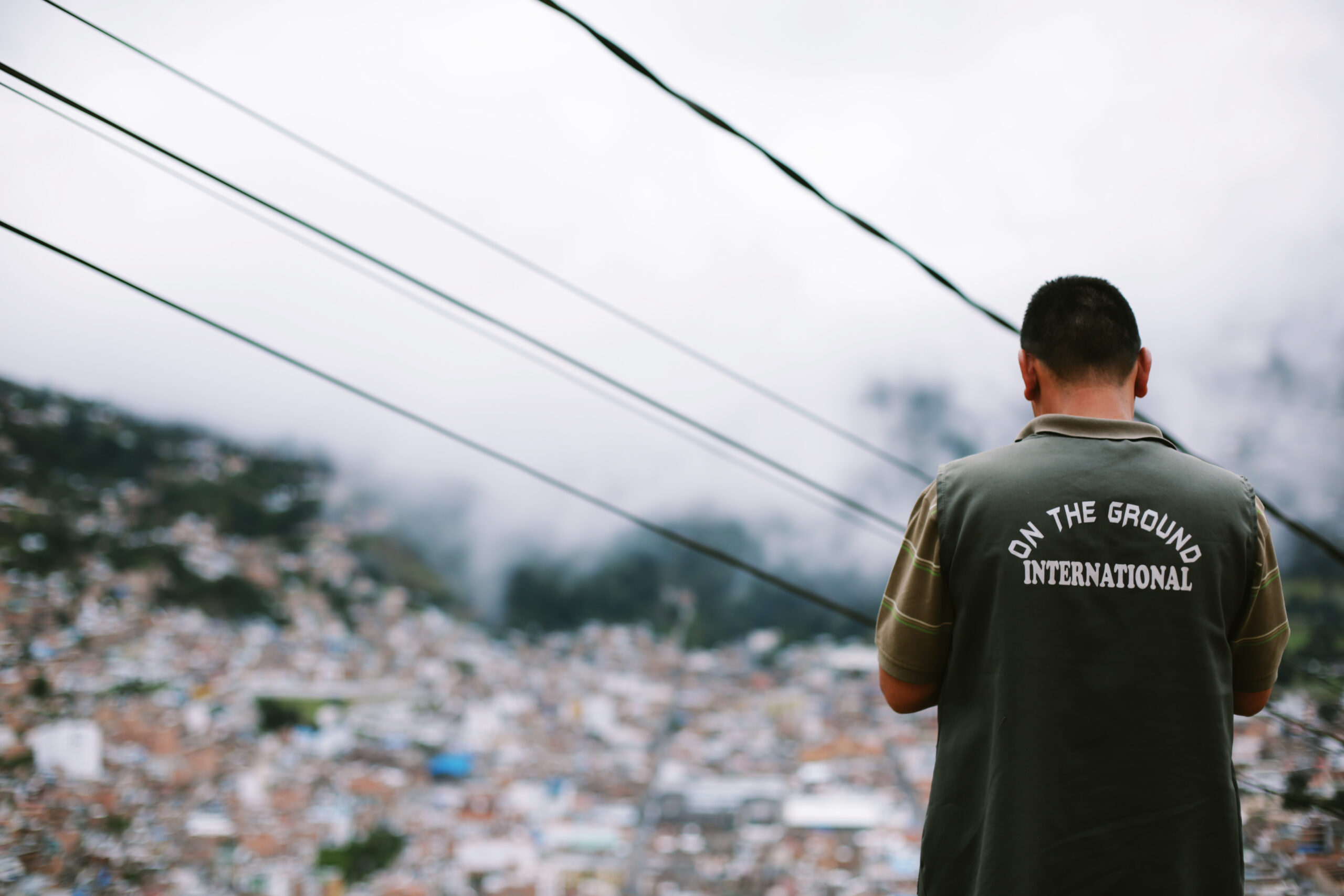 … the stray dogs and trash-filled streets are unquestionably outweighed by the landscape; you work in breathtaking views where mountains with climbing neighbourhoods surround you, greet you in the morning, and remind you of stars in the evening.

… you laugh and learn with outstanding colleagues from Columbia and Venezuela (and international volunteers). It means dancing bachata in the kitchen while cooking dinner. Peeling potatoes together to a conversation about what once was in Venezuela. Washing dishes to family sagas; both the ones who work at the shelter now, those who went elsewhere, those who stayed, and those who passed away. It feels like one big family (forgive me for all the clichés) in all of the projects – which it, to be fair, to a large degree is. I will, however, support the petition to grant the nickname ‘Loca’ to more than just one worker, for crazy is definitely the common denominator. Luckily so. From Kenny Sr whose skills range from tactical genius to multiple languages, via Betzer whose humour infects each and every cell of your body, to Ricardo whose love for his two children shows through his otherwise timid first-hand impression.

… you hear the caminantes’ stories; a small window into their life and their decision to leave or return. I’ve met a guy travelling to Uruguay on his bike alone after four marriages and a whole year of showering in cold water in Bogotá without knowing he could heat it. I’ve seen the pain in a caminante’s eye of leaving his family and daughters behind with the sole comfort and consolation of her drawing she made for him. And a father who made the walk across the mountain and the cold in Berlín to return to his daughter’s 7th birthday in Venezuela. Add then the story I’ve dubbed ‘The disappearance of caraotas’; how at the onset of the Venezuelan crisis, the extremely beloved black beans or ‘caraotas’ (main ingredient in the almost daily dinner) suddenly disappeared and were unavailable. A symptom of the massive food shortages that have forced thousands of thousands of people to walk to Colombia or even further.

… you meet enterprising women for whom the word ‘inspiring’ doesn’t suffice at all. In the resource-poor neighbourhoods of Simon Bolívar and Christo Rey, amazing women have created foundations for children to support them and their community. Through homework help, reading classes, playing together, and simply a place to be away from the streets, Fundación Rohi and especially Fundación Dharma have worked towards inclusion of these children, whereof many are Venezuelan and some unable to enter school. The children’s love for these women is mesmerising; a heart of gold sounds like much but is far from adequate.

A place for children to grow is also found at Vanessa’s shelter, where most of the previous paragraph could easily be copy-pasted. As a university student, shop owner, hairdresser, and single mother (but always dressed to the tee), she provides innumerable caminantes with a place to sleep and nutritious food cooked with the secret ingredient love in her shelter. Vanessa and her staff work tirelessly to support the caminantes on their journey and the children with some laughs from all the playing. A distraction from the sore feet, cold limbs, and worn minds.

… you fall in love with the children. Head over heels. At Christo Rey and Simon Bolívar, I have had the pleasure of teaching reading (my old metier back home) to a handful of children who haven’t yet learned and whose schooling has been paused indefinitely. The joy in Derwin’s, Anele’s, and Annelis’ eyes is contagious, and their progress channels directly into the backbone of my heart in waves of a unique frequency. At the public school 4 de Julio, a volunteer and I have taught English every week, and the smiles of these children as they learn a new word or conjugation make my day. At Vanessa’s shelter, the open hearts of the workers’ children Milanggela, Milagros, and Kerwin among others (not to forget the intelligent Sarayit and the cutest of cute Mattias) spellbind me at every shift. Their imagination, attitudes, and generosity to include you in their lives and hearts are priceless. Whether it’s drawing animals, going to the cinema, or helping with homework, they always guarantee that you leave with a heart a little heavier from the love they so unconditionally offer you. The way they interact with and include the caminantes children and always assist if they spot caminantes on the street is likewise fundamentally impressive. I bow in the dust for them (as we say in Danish) and leave my heart ajar for the respect they show me and the respect I try to aspire to show them.

The caminante children are a chapter in themselves. At Vanessa’s shelter, I’ve played with children who were unable to speak and walk and seen how their siblings supported and took care of them fuelled by unending love. In Danish, we have the proverb “from children and drunk people, you will hear the truth”, and the young 11-year-old girl I drew with (their sister) cemented it so emphatically. We (read: she) created a story together, which she later drew on a piece of paper. It goes as follows: once upon a time, a girl got lost in the forest. She was found by a pack of lions, who adopted her and took her in. The other animals, however, were less keen on the idea and wanted to expel the girl because she was a human. Nonetheless, she stood firm on the principle that both humans and other animals should live together in peace and harmony, and they lived happily ever after. Needless to say, my heart melted, and the puddle is probably still there. My heart does in any case belong there and to them. Like my co-volunteer said when they were later sitting and watching television, caring for their disabled younger siblings: Sometimes, children truly can save the world.

… you experience how the lottery of life favours the few.  At the shelter and on the road, you meet caminantes whose struggle stands out among the immense struggle of all caminantes. Caminantes with one arm, one hand, and fractures have passed by and gratefully received a meal. Among them, Carlos from Anzoátegui caught my attention. With his 62 years and broken shoes, he was walking back to stay with his daughter near the border to find a job and support himself. For the past two years, nonetheless, his eyesight has severely deteriorated, which made him quit his life and job in Medellín. At Berlín, his vision impairment caused hypothermia since he was unable to find the entrance and had to sleep outside, arriving at night. A construction worker, poet, sculptor, vendor, drawer, and father of five, he used to tell a person’s age from their hands and write a collection of stories and memoirs from Colombia. Ripped off on the road and shelter of his phone and pants, he was fighting with everything he could muster to see his daughter again and start anew once more. I had the chance to meet him at two shelters, and the poem he recited for me echoes my fascination with his life and strength.

Shared for the vast majority of caminantes is, nonetheless, that most of them don’t qualify as refugees but (economic) migrants and thus stand without sufficient support from the minute they cross the border.